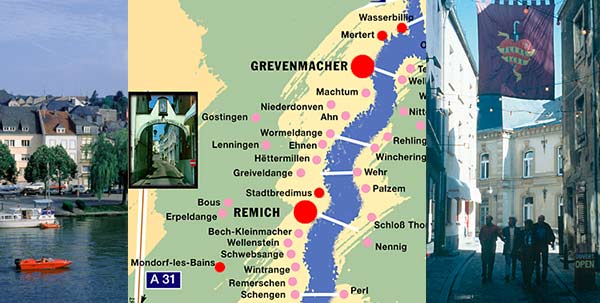 Schengen - meanwhile a place of historical importance - and Perl are the gateways to a 42 km long section of the river Moselle, which is shared between the neighbours Luxembourg and Germany. And when the river near Wasserbillig turns towards the cities of Konz and Trier, the river Sûre becomes the borderline.

The upper Moselle predominantly is a growing area for Elbling grapes - on both banks. Winegrowing in Luxembourg dates back to the early Middle Ages. But in 1709 an extreme winter occurred, destroyed most of the vine so that some regions had to give up winegrowing. Only after the war in 1870/71 an increase in prosperity began for Luxembourgian viniculture. Now Elbing grapes very often were used as basis for exported blended wine.

After World War I new structures of co-operatives took place developing better conditions for winegrowers. The Marque Nationale for wine from the Luxembougian Moselle was founded in 1935. Specific quality descriptions followed in the end of the 1950th. To the Luxembourgian sparkling wine, known as Crémant, a similar successful development happened.

Everybody, willing to broaden his/her flavourful horizon, might explore the wide variety in taste and flavour of wines from the Luxembougian Moselle. Where the Moselle valley becomes cliffy and narrower in Kanton Grevenmacher, you mostly will find racy and elegant wine, cultivated on shell limestone. But in Kanton Remich the valley shows a wide and open landscape, where round and harmonic wines grow on clay marl soil.

The Luxembourg wine-route is a must for the gourmet - The gourmet of wine and cuisine.